The state estimates the landfill costs about $1 million per mile.

Burying California’s power lines is one thing; The San Diego version is something else. The city wants to bury the wires in every street, and while that’s an ambitious goal, residents have been asking for decades when it will happen to them.

Last week, the environment committee unanimously approved a new memorandum of understanding between the city and San Diego Gas & Electric for underground power lines, which they say will speed things up. 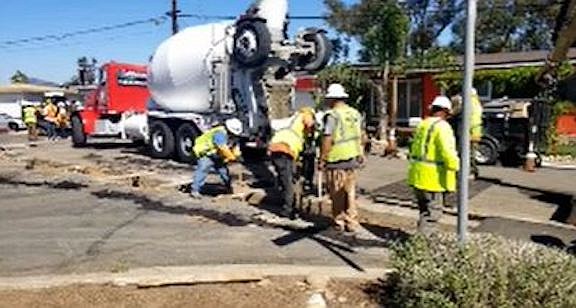 “We’re on the right track,” said board member Joe LaCava. “As you hear about sexy streets from the mayor,” he describes “no ugly boxes” as a vision the city is working on, following a wave of misplaced utility equipment in older neighborhoods along streets. narrow streets and sidewalks. (See the underground map here.)

One such neighborhood is Linda Vista, which council member Raul Campillo says appears to have been left out of the undergrounding plans altogether.

“One thing that shocked and discouraged me was that Linda Vista had no plans to develop, design or build.”

Since 2002, residents of San Diegan have paid a 3.53% surcharge on their electric bill to speed up landfilling.

In addition to the aging infrastructure, “they are located just above the Tecolote Canyon”, which increases the risk of forest fires.

According to the Linda Vista Community Plan, high voltage transmission and distribution lines run through Tecolote Canyon and along Friars Road.

The highest community priorities for the basement are listed as Ulric Street, Comstock Street, Genesee Avenue, Morena Boulevard, and West Morena Boulevard. They also want SDG&E’s help in getting “visual relief” from the Gaines Street substation.

Typically, all overhead distribution lines on a given street are underground together, with the effort funded by the utility companies and/or the assessment district, in which the owners pay.

Campillo said the state’s district fire threat tool misses many residential areas that have been impacted by fires. In District 7, “the tool encompasses all of Mission Trails Regional Park, but virtually none of the adjacent homes where the burial is going to take place,” he said.

“Basically, the communities themselves seem to be left behind,” if we simply rely on the only tool in the high-fire-risk district. People want to know when it happens, he said. They know it will help with safety and weather-related breakdowns.

He asked that the committee enter into changes to the memorandum related to high risk fire areas and awareness that would include the council’s district offices, to help the city’s older and poorer communities.

One of the reasons cited for the program’s delay was the transition to a new franchise agreement with SDG&E, approved last summer.

“We are in a unique historic place where a 50-year franchise agreement has ended and a new one begins,” said Gene Matter, the city’s deputy director of transportation and stormwater.

Despite the slowdown, “our program was able to complete 8.7 miles of landfill in 2021.”

The new agreement gives the city more control, allows for joint projects and includes a citizens’ advisory group for the franchise that includes landfill.

Each neighborhood with overhead lines is included in a master plan, which was revised in 2018. Site selection criteria were included, and council must approve each project, in which case it is awarded. Design and construction does not begin until it comes back to council for approval by a conspicuous public audience to create the underground district.

“We only receive enough funding to support about 10 miles of construction per year,” Matter said.

In addition to local surcharge funding, the city draws funds through state Rule 20A, which applies to utility providers throughout California. The San Diego surtax was established so that entire neighborhoods outside the Rule 20a boundaries could also be buried.

Matter said the fund balance was $171 million at the start of 2021. The city receives the money from SDG&E as franchise revenue and can only use it for the basement.

San Diego still has 93 miles of planned projects that meet the state’s criteria for using Rule 20a funds, such as being on a main street or scenic area.

Poles in side streets are not eligible.

SDG&E manages the money and allocates a budget, called work credits, for each city. San Diego receives between $15 million and $20 million in work credits each year. “Our work credit balance at the start of 2021 was approximately $105 million.”

Currently, he said, the state is revising Rule 20A and has temporarily stopped issuing work credits, which has put several projects on hold. There are 28 projects under construction, which should have enough work credits to complete. Nineteen others are ready to approach district councils to create new underground districts once the memorandum of understanding is adopted.

The state estimates landfill costs about $1 million per mile and individual projects typically take three years. Since 1967, the program has buried only 2,500 miles of line, out of a total of 160,000 miles.

Council member Campbell praised the work of the public-private partnership, saying that “it should serve as a model for everything we do. For 50 years, SDG&E and the city have been working block by block, street by street, to get our power lines underground.

But her District 2 waited decades and, like others, she was hoping for a delay to finish the job.

“These blocks are fortunate to have the money already allocated – many are still years away from the next phase. So, from Pacific Beach to Clairemont, Pt. Loma to Linda Vista, many of my constituents are beyond frustrated with this seemingly endless process.”

According to the report, there are 999 miles left. Matter explained the calculations. “If we’re funded to go 10 miles a year and there’s about 1,000 miles – if we can sustain this current rate of receiving $60-80 million a year, and the rate is still 6- $8 million per mile – there’s still quite a bit of work to do,” he says.